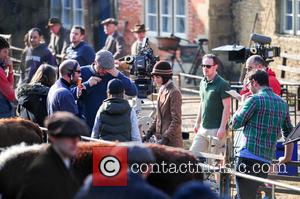 The stars of the hit period drama will join former Bond actress Samantha Bond for the inaugural Spotlight 10k Challenge in London's Regent's Park on 13 September (15).

They will be running to raise money for Acting for Others, which supports 15 theatrical charities. The fundraiser has the support of charity President Dame Judi Dench and Vice President Patrick Stewart.

Stewart says, "I am thrilled that Spotlight has arranged the 10k Challenge to support the combined theatrical charities. Good luck to all those who take part."

Bond has recorded a video urging members of the acting community and theatregoers to participate, saying, "I'll be there with some of my friends, so please sign up now and join us for the day for the first ever 10k theatrical run. It'll be fun."