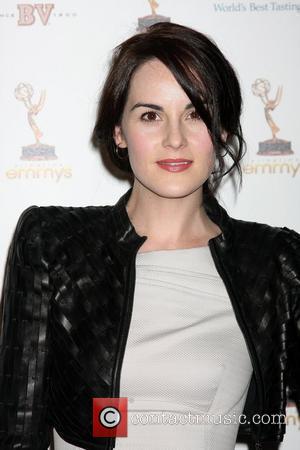 Michelle Dockery joined the cast of Downton Abbey at last night’s 64th Primetime Emmy Awards Reception. According to the Daily Mail, the upmarket dinner, held in North Hollywood, was “overrun” with cast members from the British show but Dockery stood out from the crowd, looking stunning in a demure black and white floral dress and gold shoes. Her make up was subtle and simple and her hair was tied loosely back at her neck; she looked every part the British beauty; a fitting image for the lead actress in the revered British drama.

Dockery has been nominated for the Outstanding Lead Actress award at the forthcoming Emmys and is hotly tipped to be walking away with the gong on Sunday night (September 23, 2012). It won’t be an easy win for Michelle though. She may be becoming an increasingly popluar figure in the US but she still faces fierce competition from home-grown favourites Glenn Close (for her role in Damages), Kathy Bates (for Harry’s Law), Claire Danes (Homeland), Elisabeth Moss and Julianne Marguilies (The Good Wife). Some of Michelle’s cast members are also expected to do well, including Joanne Froggatt, who has been nominated for Outstanding Supporting Actress in a Drama Series. Froggatt was also looking stunning last night, though she opted for a much bolder look, teaming an orange shift dress with a pair of nude heels.

The Emmy Awards considered to be the ‘Oscars’ equivalent for television; they’re a big deal for the US TV industry and last night’s reception dinner was awash with stars of the small screen. The ceremony, which takes place on Sunday night, will be hosted by Jimmy Kimmel.