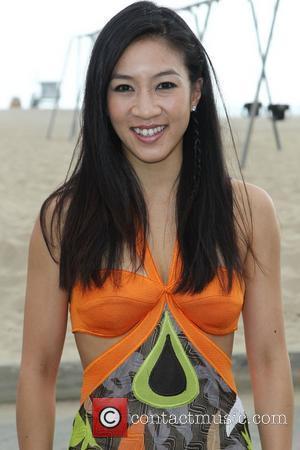 Five time world champion ice skater, Michelle Kwan married Clay Pell, a Lieutenant in the US Coast Guard, who was dressed in his full uniform, in Rhode Island on Saturday 19th January.

Surrounded by 240 friends and family, including three of Kwan's Olympic peers Brian Boitano, Dick Button and Dorothy Hamill, the couple exchanged beautiful hand written vows in an emotional ceremony. As People report, Kwan wept as she walked down the aisle with her father, and the couple also shared a kiss before the First Unitarian Church of Providence minister said those famous words. A guest said that the minister jokes, saying "And for their second first kiss as Mr. and Mrs. Clay Pell..."

Having worked with Vera Wang over many years during costume fittings, Kwan said that she 'knew [her] body very well', which made Wang the ideal designer for Kwan's wedding dress. Before Kwan was even engaged, Wang tried to get her to try on wedding dresses. "[Wang would] say, 'This shape would look great on you, try this on!' But I'd [Kwan] say, 'Vera, I'm really excited to be getting married one day, but I don't need to try on a wedding dress and if you're not engaged, it's supposed to be bad luck, right?'"

Last year, Kawn told People: "I never was one who believed in love at first sight, but I have to admit it happened for us. I felt there was a magnetic connection between us. I thought he was the one from the beginning."