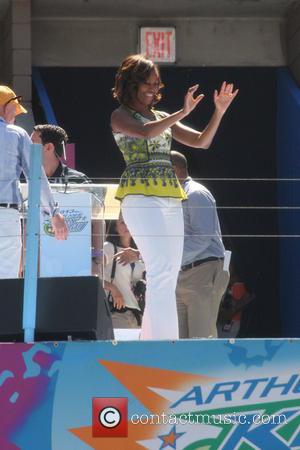 The veteran comedienne sent Hollywood into mourning when she passed away on Thursday (04Sept14), days after suffering a cardiac arrest during a routine throat procedure.

Her funeral was held in her native New York on Sunday (07Sep14) and attracted a galaxy of stars including Hugh Jackman, Whoopi Goldberg, Kelly Osbourne, and Sarah Jessica Parker, and it has now emerged Rivers had previously drawn up a wish-list of famous faces who should stay away.

In one of her final interviews, conducted just weeks before her death, she told The Sunday Times Magazine that those she wanted kept away from her funeral included Obama, who she branded "a tranny", Adele for being "fat", and Handler, who she dubbed "drunk" and a "w**re".

She also discussed how she knew death would soon be "inevitable" because of her advancing years and revealed she had been trying to help her daughter Melissa to come to terms with her mother's mortality.

Rivers added, "Melissa says, 'I don't want to hear about it, I don't want to talk about it', but I say it's comi-i-i-ing! It's inevitable. It's no longer an abstract thing. It's like, God, I'm in my eighties. Nobody, when I die, is going to say, 'How young?' They're going to say, 'She had a great ride.'"