Michelle Obama Dress: What Was It And Where Can You Get It? 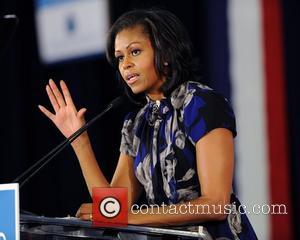 WWD.com was among the first to report on Obama's dress, which is made by designer Reed Krakoff, whose signature collection was started less than three years ago. Krakoff - who is also the president and executive creative director of Coach - said it took him and wife Delphine several hours for it all to sink in. "What's so amazing is it's such a singular moment. It really is a highlight of my career. What we are most proud of is that she would choose to wear something we created for her in New York, and to have that kind of back and forth." He began working on the abstract dress more than three months ago, though is still yet to meet the First Lady. "The First Lady is a strong confident modern woman. She knows what she likes and what works for her and that's what makes a style icon," he said, adding, "She very much embraces fashion but in a way that works for her." Though choosing not to disclose the "elaborate" process behind the making of the dress, Krakoff confirmed that it was made in his West 34th Street studio.

It is not yet known which designer Michelle Obama will wear to the Inaugural Ball on Monday night (January 21, 2013).