Actress Michelle Rodriguez Would Welcome The Chance To Work With Fellow Latina Eva Mendes If Rumours Of Her Return To The Fast And Furious Franchise Are True, But She Wants Writers To "Unite" Their Characters Instead Of Pit The Women Against One Another. 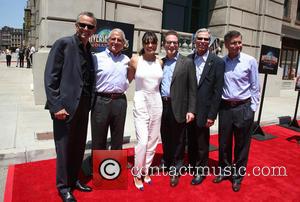 The Hitch star portrayed undercover agent Monica Fuentes in 2003's 2 Fast 2 Furious, and she is allegedly being pursued by film bosses to reprise her role in the planned eighth instalment of the racing franchise.

Reports suggest Agent Fuentes may come between Rodriguez's character, Letty Ortiz, and Vin Diesel's Dominic Toretto, but Rodriguez hopes screenwriters will find another way for the two females to interact onscreen - if Mendes does indeed end up signing on for the project.

Speaking at the launch of the new Fast & Furious ride at Universal Studios Hollywood in Los Angeles on Tuesday (23Jun15), she said, "I think that first off, girls should stop fighting each other and we should start uniting for once.

"Secondly, I think that everything is speculation until we're actually shooting and we're immortalising stuff on film."

Rodriguez, whose character was introduced in the original The Fast and the Furious in 2001, did not feature in 2 Fast 2 Furious and only reappeared in 2009's Fast & Furious. She went on to star in 2013's Fast & Furious 6 and this year's (15) blockbuster Furious 7.