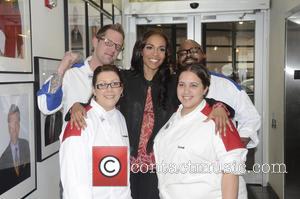 British magazine bosses are "mortified" by the outrage over a recent cover featuring Michelle Williams dressed up as a Native American, insisting the image wasn't intended to cause offence.

The Brokeback Mountain star posed for a series of photos for U.K. magazine AnOther, and in one snap, she is styled to look like a Native American in a black braided wig with a feather and a plaid shirt.

The shoot drew criticism from the Native American community, with writer Ruth Hopkins, a representative for cultural website LastRealIndians.com, branding the stunt "a serious blunder" and calling for an apology.

In a post on Jezebel.com, Hopkins wrote, "Am I glad that unlike most racist, stereotypical caricatures of American Indians in pop culture today... Michelle is not practically naked? Yes - but just as Blackface is never okay, Redface is never okay. Ever... Racism is racism no matter what era of our history you attempt to portray, or what lens or filter you use...

"AnOther Magazine and Michelle Williams have made a serious blunder here. The cover should be pulled, and all parties involved owe the American Indian community an apology."

A spokesperson for AnOther has now spoken out about the controversy, maintaining the photoshoot was influenced by "multiple fashion and cultural references, characters and eras".

A statement from the publication reads, "While we recognise the seriousness of this debate, the image in question in no way intends to mimic, trivialise or stereotype any particular ethnic group or culture... The image... is one of a suite of images... presenting Ms. Williams in a series of eight different imaginary characters.

"All the characters in the story were inspired by multiple fashion and cultural references, characters and eras, as well as by our admiration of Ms. Williams as one of the most respected and talented actresses of her generation. While we dispute the suggestion that the image has a racist subtext in the strongest possible terms, we're mortified to think that anyone would interpret it in this way."