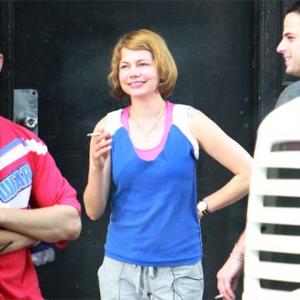 The 'Shutter Island' actress has aspirations outside of being a movie star and likes to think about all the other jobs she could potentially hold if she were to leave the profession.

She told American Hobo magazine: "I often dream of quitting acting. Walking away and becoming a laundress or a sous chef or maybe writing other people's love letters for a living.cv

The 31-year-old star â who has recently completed filming 'My Week With Marilyn', in which she portrays screen icon Marilyn Monroe - has previously said she initially wanted to be a boxer when she was younger.

She said: "First I wanted to be a boxer. I don't know why but I wanted to fight Mike Tyson. That was the dream."

However, Michelle instead left school at 15 and moved away from her parents to California where she landed a role in teen drama 'Dawson's Creek' before landing roles in films including 'Brokeback Mountain' and 'Blue Valentine'.