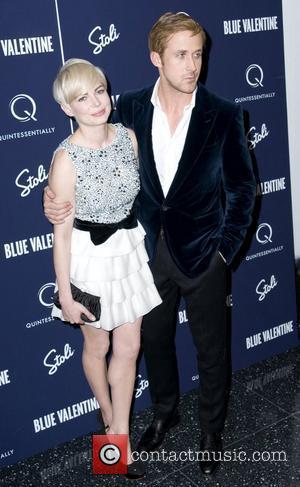 Michelle Williams has defended a controversial sex scene in her movie BLUE VALENTINE, insisting she is "proud" to have filmed the risque clinch.
The actress plays Ryan Gosling's lover in the drama, which was initially stamped with a restrictive NC-17 rating because of a graphic oral sex scene between the two stars.
Williams admits she was baffled by the decision, since she is adamant there was nothing "scandalous" about the shoot.
She tells Reuters, "When we shot that scene, both Ryan and (director) Derek (Cianfrance) said to me, 'If this bothers you when you see it in the movie, we'll take it out.'
"I thought, 'I've never seen that before in a movie and I'm proud to be the first. Good on us for making that happen.' As the woman in the situation that was in question, I found absolutely nothing scandalous, tawdry or disgusting about it."
Film censors at the Motion Picture Association of America's Classification and Rating Administration agreed to release the movie with an R rating after studio bosses challenged their original decision.