Mick Cooke - Down At The Zoo Album Review

Review of Down At The Zoo Album by Mick Cooke

After the success of 'Colours Are Brighter', an album on which he curated children's songs performed by the likes of Snow Patrol and his own Belle And Sebastian, Mick Cooke has returned with an effort based around life in a zoo. Recorded once again with the help of his band mates, proceeds go to the Save The Children charity. 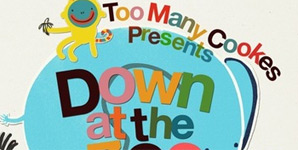 The 15 tracks presented here essentially work as a tour of a zoo from both the perspective of workers and the animals themselves. All song durations are relatively short, obviously for the low attention spans of little children, whilst there's a sense of fun right from the opening 'The Zookeeper's Song'. The cuts about the animals themselves vary in sound and mood as Cooke seeks to characterise the creatures not just through their lyrics but with the music itself. For example, 'We Are the Tigers' is a punk-lite affair (and did you know tigers eat chocolate pie?!) whilst 'Cecil The Saddest Of Snakes' is a slower meandering affair with plenty of hissing. The amusement for adults may soon disappear but for youngsters this is a lovely way to learn a little about the animal world and repeat plays are not to be expected. Testament to Cooke's skill at reaching the right audience was the face-wide grin of my son every time this record was started - which should be all that is required for any parent to go through another listen.

Mick Cooke - Down At The Zoo