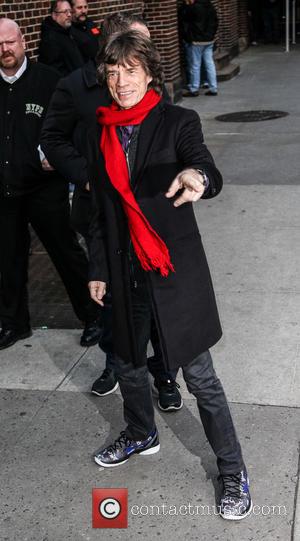 Mick Jagger has finally broken his silence on the subject of Maroon 5's number one hit 'Moves Like Jagger' and revealed that he didn't get paid anything for his reference in the song.

The Rolling Stones lead vocalist appeared for an interview on 'The Late Show with David Letterman' and, to the viewers' amusement, produced a list entitled: 'Top Ten Things I, Mick Jagger, Have Learned After 50 Years In Rock 'n' Roll'. On the list was a light-hearted dig at Maroon 5's song 'Moves Like Jagger' featuring Christina Aguilera, the video of which begins with footage of Jagger in his younger years and later shows singer Adam Levine trying out some of the famous dance moves. Jagger had written on his list that he had learned that "You don't earn a cent when someone does a song about having moves like Jagger." The music legend also drew laughs from his other advice which included, "Be considerate of other hotel guests - trash your room by 10 pm" and, "Before shouting 'Hi Seattle!' make sure you're in Seattle."

'Moves Like Jagger' is not the first number one hit that has referenced the star; he has also been mentioned in Ke$ha's 'TiK ToK' ('We kick em to the curb unless they look like Mick Jagger') and Cher Lloyd's 'Swagger Jagger'.