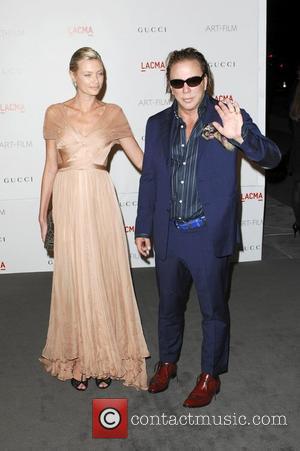 Mickey Rourke is facing a major muscle implant after tearing his bicep arm wrestling rugby players.
The movie star and one-time boxer has revealed that surgery he underwent to repair a tendon in his shoulder was unsuccessful and now he has to have another operation to fix the problem.
He tells WENN, "I lost my whole tendon. There’s no muscle up here now. It looks like a 12 year old's arm.
"They have to put somebody’s dead tendon in here... I’m going to have to have a cadaver tendon put in to fix it."
But at least he has a good story to tell about the injury: "I was arm wrestling some rugby players at four in the morning. We had been drinking at a pub in London and I lost. But we became good friends."
The injury left Rourke with a dilemma as he prepared to play King Hyperion in epic new action movie Immortals - because he feared he wouldn't be able to look like a warrior.
He explains, "I was actually worried about just being able to tie my shoes. It’s one of the reasons I wore a gauntlet on the top of my right arm for the costume. I had a big scar."