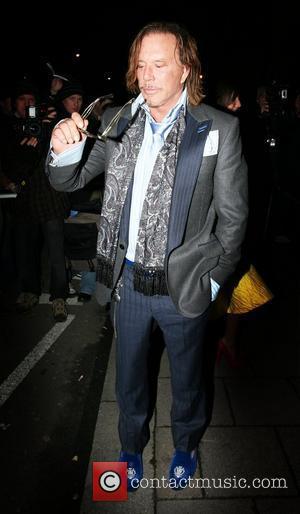 Mickey Rourke turned the air blue at the British Academy of Film and Television Arts (BAFTA) Awards as he credited THE WRESTLER director Darren Aronofsky with rescuing his career.Rourke won the prestigious Leading Actor gong at the BAFTAs in London on Sunday night (08Feb09) for his role as Randy 'The Ram' Robinson in the acclaimed movie.
And he caused much laughter among the star-studded audience at the awards ceremony with a reference to his years in the wilderness and a cheeky nod to his co-star Marisa Tomei.
Accepting the award, Rourke said: "Darren Aronofsky gave me a second chance after I f**ked up my career for 15 years...
"I want to thank my publicist Paula for having the hardest job in showbiz - telling me where to go, what to do, when to do it. What to eat, what to dress, what to f**k. It's such a pleasure to be here and back out of the darkness.
"Marisa Tomei for putting up with me - she's a hell of a talent and was very brave for taking her clothes off all the time. I enjoyed looking at her!"
But Rourke showed his softer side by dedicating the win to veteran star Richard Harris, who died in 2002.
He adds, "Last but not least... I would like to dedicate this to an actor who is not here anymore that was a great friend of mine. His spirit and his talent live on; the great Richard Harris."