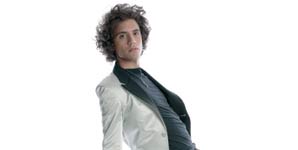 Having spent most of his youth travelling from country to country Mika finally settled in London, and he has got a lot to say about with his experiences through life.
Born in Lebanon and raised in Paris and London, hopping from country to country like a footloose hippy with his four brothers and sisters he has managed to write some classic songs that are currently being aired all across stations like Radio One.
We got the chance to speak to him after his first ever festival performance, and where better to debut then the Bestival.

Contactmusic.com: Hi Mika, pleasure to meet you
Mika: You too

CM: So would this be your first festival
M: Yes, It is! I'm a festival virgin. It's only my third gig so I'm really looking forward to playing. I've been here all day so I've been busy looking around. last night I went bumbling around so I'm hoping my voice holds out for 1.30 in the morning!!

CM: So you're playing tonight in the Big Top what can we expect?
M: My show is quite bouncy, I cant control myself, I don't do drugs I think if I did id probably fall off the stage, I just bounce around I don't know, ill probably throw in a Shakira cover or something I have no fu**ing clue, the thing is with being here, I can get away with pretty much anything so I'm really looking forward to it!

CM: Feeling a bit nervous about it at all? This will be your biggest crowd so far.
M: No, how can I feel nervous when there's people walking around dressed up as harlequins, monkeys and tigger, you can't be nervous around here.

CM: Very valid point! You're a very new artist yet your new is spreading very quickly, do you find websites like that a real help to you, I know you have, like everyone, your own myspace?
M: I think they are amazing actually, I developed my myspace page on my own before it all got kinda exciting, but it's great, receiving messages from people and having an outlet for people to contact you, I've had so many messages from people from all over the world who have heard my music and people from MTV, Radio 1 and djs, really famous musicians, it's just amazing to have an outlet like that where so many levels of people can use it, like if I didn't know what people were thinking id probably be loosing my mind. The only outlet for my music previously had just been through press and that's always a little bit dangerous to rely on.

CM: So talking about websites I have been on yours and the artwork is just amazing, did you design that?
M: Yea I did that with my sister, who is actually here at the festival with me, we collaborated with a company that also makes all these little non permanent tattoos that I'm wearing (takes jacket off to reveal the non-permanent tattoos all down his arm). Being a solo artist, I think I can do a lot of things bands couldn't usually do. I think people are becoming more visual with music, I guess this is just one of my ways. It's kinda like a psychedelic children's storybook on acid!

CM: You say how 'Grace Kelly' is a big 'up yours' to the people you were working with at the time, can you elaborate on that at all?
M: oh sure! Well like a lot of people who were trying to get signed I was working with anybody to try and get somewhere people were trying to get me to write songs that really weren't me, I thought it would be really funny to turn all my anger into this song, so I wrote the song and I typed out the lyrics and sent all these people the lyrics and the CD, they never called me back, which is ironic because a year later that was the song that ended up getting me signed, so it's a good f**k you song!

CM: So you have been recording the album in LA
M: Yea I co-produced it with a guy called Greg Wells, he's pretty amazing, he did a lot of work with KD Lang and it was just cool to find a producer to collaborate with me, and also in Los Angeles which I think is one of the best places in the world to record, I love writing in London, that's my home but recording we used everyone from John Lewis String Orchestra and Paul Bukmaster who worked on all the Quincy Jones records and pretty much everybody, Mark Chamberlain the drummer flew in for a week so in LA everyone's available and everyone's so professional and open minded. So it's cool as long as you have the budget, which thankfully I managed to get as I knew I needed a lot of money to make the record. But I had the support & I had freedom.

CM: So when will it be available for us?
M: It's available in February 2007 so you gotta wait a little bit but i've got a little teaser single coming out on the 2nd October and that is "Relax Take It Easy" and "Billy Brown" and there is also 7 inches available.

CM: Did you have any favourites when you were growing up that you listened too?
M: I really leaned towards bands/artists, who write & and co-produce their records, you know with the writing & production, it's all part of the record so you can't take one away from the other, if you look at people like Prince. I think it would be very hard to sing any Prince song and do it any justice.

CM: So do you have any tours planned? What's in the future for yourself?
M: I've got a UK tour in November and we're doing everything from Bristol to Glasgow, we've also got some special shows, some of them are secret and some really fun unannounced Christmas shows. I have a 'secret society' where the secret shows will be announced, it could be seen as cheesy but I think its quite fun, I mean look, it's pop music! anybody who says I'm trying to be cool, I don't have any time for that quite frankly because I don't really want to be cool I just want to be myself and have a great time doing it.

CM: Now, I have read that you have done a lot of travelling in your life; do you think that has influenced your sounds at all?
M: Oh yea its given me a very strong sense of self, Grace Kelly would never of come out of a person who has stayed sensible all there lives and grown up in the same place, it takes away some of your sense of home and security but I think that's a good thing as an artist even if its not a good thing for your life. But yea Defiantly it stretched me and it continues too, luckily I've found a home in London but I still question everything , the state of everything and nothings permanent to me, so it keeps me awake.

CM: So one final thing then can I ask you about the chewing gum commercial?
M: (laughs) yes of course, shall I sing it? (sings) "and it cleans your teeth too, Orbit chewing gum clap, clap". I was a kid when that came out probably about 13 years old, £45...that's all I got, royal rip off!!!! It wasn't Orbits fault it was the studio I worked with at the time but it was good I got a lot of work out of it, I did that and then the next thing I did stuff with the Royal Opera House so erm, yea a little bit of a whore! you know...whores are very wise people!!!

CM: Well Thank you Mika, its been fantastic!
M: Thank you, I just hope my voice keeps up later!