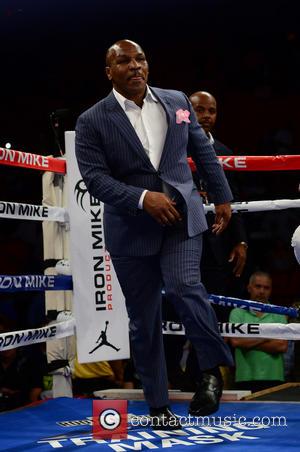 Former fighting foes Mike Tyson and Evander Holyfield are set to meet in Las Vegas again when The Hangover star inducts his longtime rival into the Nevada Boxing Hall of Fame.

Seventeen years after Tyson infamously nibbled off part of Holyfield's ear in a 1997 championship bout, the boxer-turned-actor and promoter will be on hand to salute Holyfield on 9 August (14).

The two former boxers have since patched up their differences and have become friends.

Rich Marotta, the president of the Nevada Boxing Hall of Fame, tells the Los Angeles Times, "This is the kind of thing we showed is possible in boxing last year at our inaugural induction ceremony - former and even current rivals coming together under the same roof to celebrate boxing. Everyone checks those rivalries at the door. Tyson presenting Holyfield is sheer magic."

Holyfield will join Tyson, Julio Cesar Chavez, Larry Holmes, Oscar De La Hoya and Sugar Ray Leonard, among others, who were inducted into the Hall of Fame last year (13).