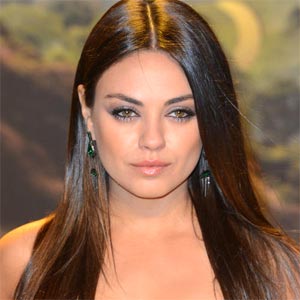 After her break-out role in That '70s Show, Ukraine-born actress Mila Kunis has built a remarkably varied career, voicing Meg in Family Guy and starring in Seth MacFarlane's Ted, while also trying her hand at action (The Book of Eli) and serious drama (Black Swan). Now she's bravely taking on the iconic character of the Wicked Witch of the West from The Wizard of Oz in the prequel Oz the Great and Powerful...

You usually play glamorous, sexy characters. How did it feel to be the ugly duckling for a change?
It was incredibly freeing. And it was the first time in my life where putting on a costume really did change the way I played the character. So much of that had to do with the contact lenses: they were hand-painted and the pupils didn't dilate, so my vision was very narrow. "I can't see you and you can't see me, so I can do whatever I want!" So it kind of allowed me to explore and have fun without worrying what people thought. It was great! Also, the second you're in a corset you end up walking differently. And all three witches [alongside Michelle Williams and Rachel Weisz] wore heels, so we had to run in heels and do stunts in heels, which also changes the way you hold yourself. And that in its own right helps you figure your character out.

Were you influenced by Margaret Hamilton's memorable performance in the 1939 movie?
The truth is that no, I didn't want to imitate or do anything that would take away from the iconic character that was created so wonderfully and beautifully and will remain so iconic. What I was given was the gift of a back-story - the origin of the character - and humanising her in a way. I mean it's very simple: it's just a girl who gets her heart broken, doesn't know how to deal with pain, takes the easy way out, numbs the pain and has an emotional transformation that just so happens to be mirrored with a physical one. And the second she became human to me is when it made sense. Everything else was kind of secondary. She's a woman scorned who just so happens to know how to fly. I would never dare try to emulate something that's so beyond iconic.

Were there any problems while doing the flying scenes?
No, I'm still whole and in one piece. It's actually not that bad. The hardest part about any scene that requires wires is the amount of time you spend on them. So being wired is not hard, and being flung 35 feet in the air isn't hard. And any time that anything malfunctions, it is computerised so the whole system just shuts down and you bounce. But 17 hours in a work day, it's just a little painful.

Did you learn any tricks about making a 3D movie?
I learned that hats are not good for 3D. Lesson learned: hats protrude in 3D! So over-the-shoulder shots take much longer to shoot. But I love hats in this movie!

How does this darker character compare to possibly starring in 50 Shades of Grey?
You will not see me in 50 Shades of Grey. I'm so sorry! But no, it's fantastic playing a character like this one. You're lucky if you're given any character that has any sort of arc, and here I was given a character with the most dramatic, fantastical arc you could ever imagine. And there were no rules against it. I mean, there's no boundaries, there's no formula to follow. It was just to have fun, and I had Sam [Raimi, the director] there to protect me and kind of steer me in the right direction if I were to falter. So I felt very safe. But I will not be in 50 Shades of Grey. I promise.