Speculation that Ashton Kutcher has popped the question has begun, after Mila Kunis was spotted wearing a diamond ring while shopping on Thursday (Feb 27th). 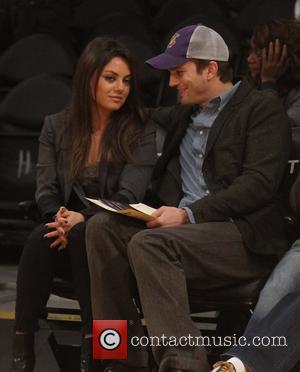 Picture: Mila Kunis and Ashton Kutcher - Friday January 3, 2014; Celebs out at the Lakers game. The Los Angeles Lakers defeated the Utah Jazz by...

Former 'That 70s Show' co-stars Mila Kunis and Ashton Kutcher are set to tie the knot.

The acting pair, who first met when playing the characters 'Jackie' and 'Kelso', recently became engaged, according to E!News.

A source told the gossip site that Kutcher and Kunis, who have been dating for two years, have been thinking about taking their relationship to the next level for some time now.

The 30 year-old actress was also spotted wearing a diamond ring on her left hand while shopping on Thursday (Feb 27th).

Since his and the 51 year-old actress' long and messy divorce was eventually finalized this past November (2013), Ashton and Mila didn't want to wait too long until they began making wedding plans.

"Ashton and Mila have talked about getting married for quite a while," a business source close to the 35 year-old told People in December.

A friend of Kutcher's also added, "They're incredibly happy together."

Even though it took several months for the celebrity couple, who are known to be private, to publically acknowledge their relationship, they have shared some intimate PDA moments as of late.

The 'Two and a Half Men' actor posted a rare photo on Dec 10th, via his twitter account, of the pair sharing a romantic kiss under a neon lit sign titled 'SUN.'

The snap was taken while they were visiting Sun Records in Memphis, and the caption read, "Sunset #nofilter."

This will be the first marriage for Kunis.