Mila Kunis is set to play Vivian, a women who Walden finds himself falling for despite preparing to propose to someone else, when she guest stars opposite her beau, Ashton Kutcher on 'Two and a Half Men.' 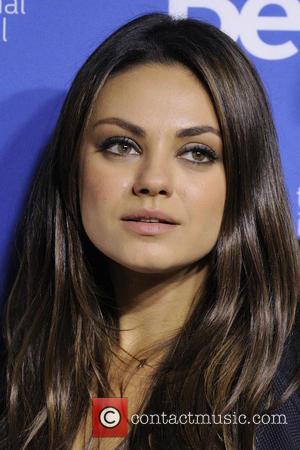 Mila Kunis will be returning to the small screen, but only for a one-off appearance.

The 30 year-old actress is reportedly scheduled to guest star on CBS's 'Two and a Half Men', opposite her beau, Ashton Kutcher.

The network made the announcement, of the former 'That 70's Show' co-stars reuniting on the sitcom, this past Tuesday (March 4th).

According to CBS, Kunis will star as Vivian, "a young, beautiful, free-spirited world traveler" who unexpectedly turns up to Walden's (Kuther) house.

Once they are acquainted, Walden finds himself falling hard for Vivian and is certain she is "the one", but as he was about to propose to someone else, drama follows.

Mila's appearance come after the Russian-born actress has finished shooting her next big Hollywood film 'Jupiter Ascending', which she stars alongside another heartthrob, Channing Tatum.

She is currently still the voice of 'Meg' on Seth MacFarlane's hit animated sitcom 'Family Guy.'

The announcement of the latest 'Two and a Half Men' guest star comes a week after Kutcher and Kunis reportedly became engaged, with news of this surfacing at the end of last month (Feb 28th).

Speculation began when the 'Friends With Benefits' actress was spotted wearing a diamond ring on her left hand while shopping on one Thursday afternoon (Feb 27th).

Since his and the 51 year-old actress' long and messy divorce was eventually finalized this past November (2013), Ashton and Mila didn't want to wait too long until they began making wedding plans.

There has been no air date of the episode Mila will guest star in, but 'Two and a Half Men' broadcasts Thursdays on CBS. Kutcher and Kunis are reportedly engaged