Mila Kunis Goes To The Ball

Mila Kunis attended the Marine Corps Ball in Greeneville, North Carolina, on Friday (18.11.11) after Sgt. Scott Moore asked her out via a YouTube message earlier this year. 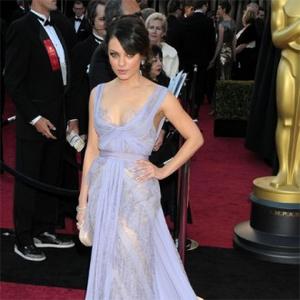 Mila Kunis kept her promise to an American Marine by attending the Marine Corps Ball in Greeneville, North Carolina, on Friday (18.11.11).

The 'Friends with Benefits' actress - who ended her eight-year relationship with Macaulay Culkin earlier in 2011 - was asked via a YouTube message by Sgt. Scott Moore of the 3rd Battalion 2nd Marines to accompany him to the bash, which she accepted.

Mila - who looked stunning in a black dress with her hair slicked back in an up-do - was greeted by her date as she arrived at the North Carolina Convention Centre and everyone seemed excited about her attendance.

"They're celebrating all of our Marine Corps history as well as the accomplishments and sacrifices they make while overseas and celebrating the lives of the fallen marines and sailors they lost while they were over there."

He added afterwards: "Everything went well. It was a great experience for everybody."

The guests were impressed with down to earth Mila, who happily posed for pictures with guests and enjoyed a dance with her date despite previously claiming her dancing days were finished after she suffered a number of injuries while playing a professional ballerina in 'Black Swan'

She previously said: "I had never danced in my life. I trained for four months, seven days a week, five hours a day. I had one day off on my birthday. I lost 20 pounds. I tore a ligament. I dislocated my shoulder. I have two scars on my back. And it was worth every minute.

"But I will never dance again. I was like, 'Well - I wear heels; I can do this.' I was wrong. Christian Louboutins are uncomfortable, but I screamed the first time I put on a pointed shoe."