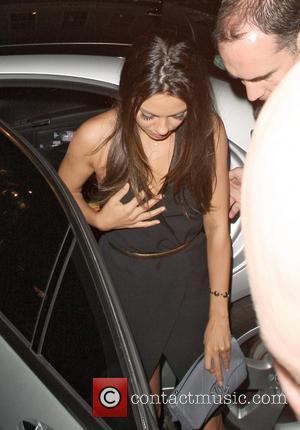 Picture: Mila Kunis arriving at Nobu restaurant in Mayfair with her 'Friends with Benefits' co-star. A member of Justin Timberlake's security team is alleged to...

Actress Mila Kunis is frustrated about the lack of interest in U.S. politics, insisting it's "crazy" American youngsters "don't educate themselves about the world".
The Black Swan star is a staunch supporter of President Barack Obama and she's baffled that others in her age group don't hold political views.
She's urged the youth of America to sit down with a book or newspaper and learn about current affairs - for the sake of their own children.
Kunis tells Britain's Stylist magazine, "Yes (I'm frustrated), because you are given such an amazing opportunity with so much information. Why is no-one taking advantage of it? You don't have to watch Fox News or CNN or Msnbc; you don't have to be part of a political party, you could just read. Why is nobody reading? I feel like, in our generation, people don't read.
"They don't read books, they don't read the paper, they don't read the news. So obviously you are incredibly ill-informed to the point where they will go do these tests in Middle America... And they'll ask, 'OK, what party are you?' And they'll say, 'Republican'. 'Why?' And they can't even tell you. They have no idea what the Republican Party stands for.
"Why did I vote for Obama? I can tell you why I voted for him, what I agreed and disagreed with him on, for hours. It's crazy to me that people don't educate themselves about the world considering so many of them have children who are going to suffer because of it.
"Whoever you vote for, don't do it just because. And don't tell me it's because of religion either because that whole thing is knocked completely out the window. So you better just educate yourself."