The actress was unseasonably open in a new interview during which she discussed her career and the future. 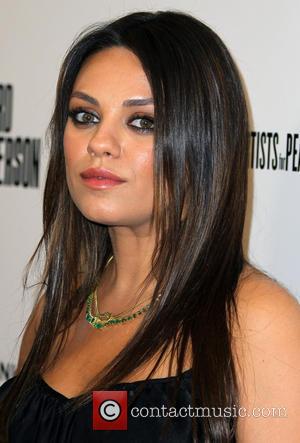 Mila Kunis isn't one to go blabbing about her personal life to anyone who asks. Therefore, when she does decide to let a little light in on her impending marriage to fellow actor Ashton Kutcher and increasingly obvious pregnancy, people sit up and listen. The 30 year-old mother-to-be opened up during an interview with W Magazine to promote her new movie, Jupiter Ascending.

Reflecting upon her pregnancy, which she first confirmed during a TV interview on Ellen, Kunis demonstrated a deep-seated ire towards the paparazzi and the tabloids for sensationalising her relationship with Ashton and presuming information about her unborn child.

"Every day and every night, the paparazzi are parked outside my house," she said. "Today, I had to drive through the Warner Bros. back lot on my way here, just to throw them off. They want a shot of my stomach because they need proof of my pregnancy. I don't know why they even bother-they've been saying I'm pregnant for years. Now they're right, so they won't leave me alone."

Mila, born Milena, moved to L.A. from Ukraine when she was just seven years old. To improve her English, her parents encouraged her to attend acting classes and after being snapped up by an agent she never looked back. "You will never see me in bell-bottoms ever again," Mila said whilst talking about her time on hit '90s sitcom That 70s Show.

Kunis became a household name after she appeared as a ballet dancer in the dark, Oscar-winning drama, Black Swan. Having lost weight and trained intensively for the challenging role, she said she had been put of ballet for life. "The first time I put on a pointe shoe, I screamed," she said. "I will never dance again. It was the hardest thing I've done."

Revealing that she had promised to introduce Kutcher's cousins to her Jupiter co-star Channing Tatum, Mila's heart was full of love. "We all get movie star crushes," she said. "I'm marrying mine."

"My first real kiss ever was with him on the show.And when That '70s Show had a prom, my date for the prom turned out to be my fiancé," she continued, adding "I went through everything embarrassing that a girl can go through in front of my fiancé. There's no question that he's seen the worst. I find that comforting."

Jupiter Ascending will be released on the 6th February. Mila Kunis Usually Takes A Hard-Line Approach To The Press, But Opens Up In A New Interview.