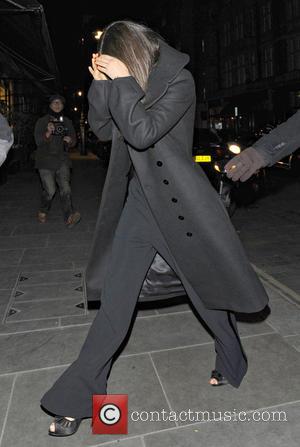 British royalty Princess Beatrice and boyfriend Dave Clark entertained Hollywood couple Mila Kunis and Ashton Kutcher over the weekend, taking them on a tour of London's swankiest bars and restaurants. Things started at the Duck & Waffle on the 40th floor of Heron Tower in East London, but soon headed to Callooh Callay in Shoreditch.

Next came the John Salt bar in Islington, North London, where the drinks kept on coming. "They asked for our best speciality dish, said John Salt boss Leigh Gillson, "We gave them deep fried banana in caramel." A source added: "It wasn't a boozy bender, more an upmarket crawl." Mila, 29 and Ashton, 35, are currently living in London while the actress shoots her new movie Jupiter Ascending.

According to the UK's Daily Mail, the foursome even managed to hit celebrity restaurant Scott's in Mayfair and the Spanish restaurant Cambio De Tercio in Kensington, where Mila and Ashton were given matching Real Madrid shirts - which they later wore.

Jupiter Ascending is the new movie from the Wachowski's, about a universe where humans are near the bottom of the evolutionary ladder. Kunis plays a young destiture woman targeted for assassination by the Queen because her very existence threatens to the end the royal's reign. Erm, should Princess Beatrice really be hanging out with Mila?