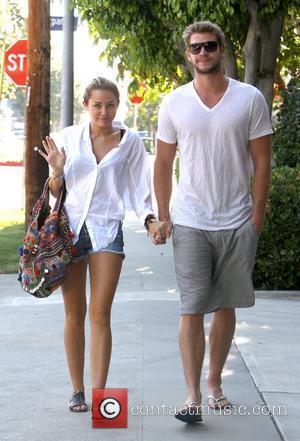 Miley Cyrus has sparked rumours she's started another on-set romance, just days after her split from actor Liam Hemsworth.
The Hannah Montana star fell for Hemsworth after they were cast as lovers in the movie The Last Song, but Hemsworth recently confirmed the pair had split.
And new reports suggest Cyrus has already moved on and into the arms of Douglas Booth, an actor who appears in her forthcoming comedy LOL: Laughing Out Loud.
The pair were spotted cosying up at Waterford, Michigan restaurant the Lion’s Den while out with their co-stars earlier this week (begs23Aug10).
The restaurant's bartender tells PerezHilton.com, “I thought they were boyfriend and girlfriend, they were flirting so much. She was really fawning all over him, acting really girly-girly. For his part, he seemed to be eating up the attention…The flirting was very respectful and no, they didn’t (kiss). They were among friends and other people in the restaurant - but she was falling all over him. ”