Miley Cyrus has been accused of disappointing her very sick young fan Miley Hodge at a special meet-and-greet by not paying enough attention to her. 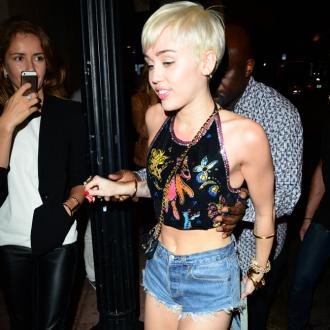 Miley Cyrus has been accused of disappointing a very sick young fan at a special meet-and-greet.

The 'Wrecking Ball' singer reportedly stepped in and agreed to spend time with seven-year-old Miley Hodge, who has terminal bone cancer and has been given a maximum of six-months to live, after the child's family reached out to the Make-A-Wish Foundation in a bid to help her meet her favourite celebrity, Justin Bieber, who wasn't available.

But the encounter didn't go well, according to family friend Brandon Deboer, who told gossip website RadarOnline.com: ''From what I know, it was not a very good experience for them.''

Another insider explained: ''The family went to Los Angeles and were put off for nearly a week before they met [Cyrus]. They finally met at the recording studio and from what I understand, Cyrus was more interested in what she was doing in the studio than paying attention to the little girl.''

But young Miley's father Bert Hodge insisted they were ''grateful for the chance to meet Cyrus in person.''

He added: ''I think that if she wants to meet 50 celebrities, she deserves that chance. She has fought hard to stay alive. She has beaten the odds, [and] hasn't gave up.''

The Hodge family and their friends are still hoping that the little girl will get a chance to meet Justin, 20, and have launched a campaign to get his attention on Twitter, which has already attracted support from P. Diddy, Kelly Osbourne, Mike Tyson and Tara Reid.

Mr Deboer said: ''She loves Justin, his music and that he tells her never to give up on her dreams. Her dream is to meet him one day, only she doesn't have many days left.''