Miley Cyrus has adopted a rescue dog, a chihuahua mix puppy she has named Bean. 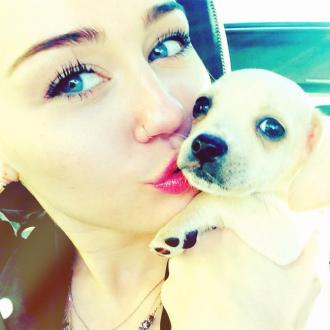 The 20-year-old singer-and-actress has given a home to an adorable chihuahua cross breed puppy who she has named Bean.

In a series of Tweets - accompanied by a picture of her and her new dog - Miley wrote: ''Meet Bean @SpotRescueDogs Bean is a little girl :) she is a chihuahua mix of some type :) she brought so much sunshine!!! (sic)''

Miley - who is engaged to actor Liam Hemsworth - has posted several images of her with her new canine friend on the social networking site and it seems the pooch has had no trouble making herself comfortable in her new home.

In other tweets, the 'Party in the USA' hitmaker revealed: ''I love my little bean so much ... My little burrito ... I spot a baby bean Napping with her Aunty @RealDenikaB #puppyluv (sic)''

Miley's decision to get a puppy comes just a few weeks after her dog Lila was killed by one of her other pets.

In December, the former 'Hannah Montana' singer was left heartbroken after the diminutive Yorkshire terrier was fatally attacked by her English bulldog Ziggy.

Miley even dedicated her performance at the 'VH1 Divas' concert to her departed mutt.

The pop star also made the painful decision to give up Ziggy to an owner with no other pets or children in case the attack wasn't a one-off.