Miley Cyrus is reportedly ''doing fine'' after she underwent a minor operation to have a cyst removed from her wrist. 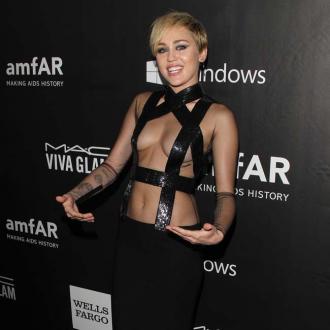 Miley Cyrus is ''doing fine'' after her operation.

She shared a graphic photo of what appears to be a wound on her arm being held open by surgical instruments as well as a picture of her in a hospital gown, captioning it: ''sooooo hipster (sic)''.

This is not the star's first trip to hospital this year. In April, Miley suffered a severe allergic reaction to Cephalexin, an antibiotic which is used to treat the flu.

At the time, a source revealed that the 22-year-old singer would be joined by a nurse for the rest of her UK 'Bangerz' tour.

They said previously: ''Miley has been under the supervision of two nurses, who are monitoring her progress 24 hours a day at her home.

''She already has a nurse on standby for when she lands in the UK. The worst thing about her illness is that there are times when she feels entirely fine but then suddenly her symptoms flare up again.

''The reaction could still affect her over the next few days but Miley is determined to put on a great show for her UK fans.''

Miley was reportedly given steroids as well as intravenous drips to keep her hydrated. She also used an oxygen tank to aid her breathing.

The insider continued: ''While she was in hospital, she couldn't really eat without feeling nauseous so she started bingeing on junk food.

''Now she has been played on a strict diet of fresh fruit and veg, and is having vitamin shots to boost her immunity.

''Plus she has been banned from drinking booze or smoking anything, especially weed.''