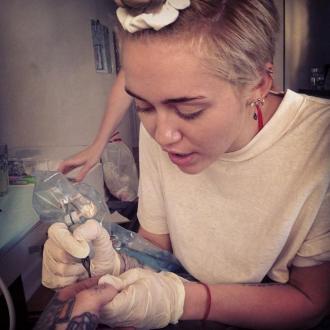 The 'Wrecking Ball' hitmaker took advantage of a break in her 'Bangerz' tour to meet up with Bang Bang in New York City, and the pair inked matching crescent moons on one another.

Miley had the tattoo artist etch the design on her left inner-arm, while she then returned the favour and inked the design onto Bang Bang's thumb.

Showing off the artwork, she wrote on Instagram alongside some pictures of them both: ''BFF tats with @bangbangnyc

Bang Bang shared a picture of Miley applying his tattoo, writing: ''I turned @mileycyrus Into a tattoo artist today (sic)''

And the inking session didn't end there, as the 21-year-old singer also opted to pay homage to the Flaming Lips by having the words 'Love Yer Brain' - the title of a 1987 song by the psychedelic rockers - etched onto her right forearm.

Miley has a number of tattoos, and last month had a tribute to her late dog tattooed on her side.

The 'We Can't Stop' singer - whose Alaskan Klee Kai Floyd was killed by a coyote in April - has had her beloved pooch's head inked under her left armpit with a speech bubble that reads, ''WITH A LITTLE HELP FROM MY FWENDS.''

The 21-year-old singer was at a house party when she and a group of friends decided to get the matching tattoos in tribute to the late pup.

Miley captioned a photo of the finished design which she posted on Instagram: ''#withalittlehelpfrommyfwends #housepartygreentonguefloydtats (sic)''