Miley Cyrus has shaved her armpits

Miley Cyrus has shaved her armpits for a new campaign for Golden Lady. 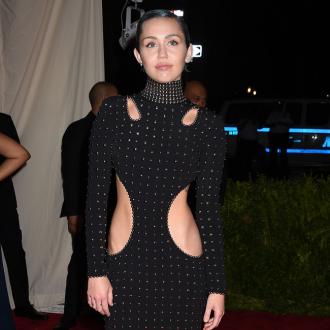 The 22-year-old singer was still sporting her dyed-pink armpit hair on Thursday (28.05.15) in a bikini selfie on Instagram, but has got rid of it for an advert for hosiery brand Golden Lady.

Miley has stripped off to a bright blue bikini for the photo, and is holding her arms up in the air, showing off her clean-shaven underarms, next to the campaign slogan 'Rock Your Summer', as seen on Mirror Online.

The 'Party In The USA' hitmaker first debuted her unshaven pits last month in an Instagram photo, as she wore custom nipple pasties as a tribute to Joan Jett, and then showed she'd taken the look further by dying the hair pink a few weeks ago.

In the new photos for Golden Lady, Miley's tattoos are all out on show, including the one of her late pet blowfish Pablow, who Miley wrote a song about after it died in February.

She broke down in tears while performing the track she wrote about him during her Backyard Sessions showcase earlier this month.

Dressed in a unicorn onesie, the 'Wrecking Ball' singer - whose pet dog Floyd also got killed by a coyote in April 2014 - poured her heart out in the lyrics, singing: ''Why does everything that I love have to die? If I could do it again, I'd release you to sea because I can't bear to see someone so wild just die in a tank.''