Miley Cyrus Joined Joan Jett Onstage At The Rock And Roll Hall Of Fame Induction Ceremony On Saturday (18apr15) After Welcoming The Rocker And Her Band The Blackhearts Into The Museum. 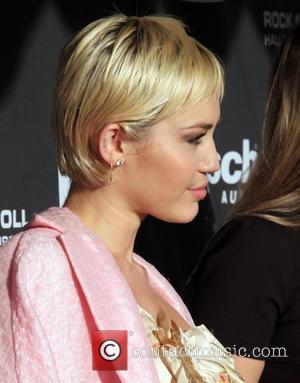 Picture: Miley Cyrus - Photo's of a host of rock and roll stars as they attended the the Rock and Roll Hall of Fame Inductees 2015...

The Wrecking Ball hitmaker, who sported pasties with Jett's initials on them over her breasts, recalled her first meeting with the 56-year-old in her speech.

She said, "We were doing Oprah together, and I went up to Joan's hotel room. Joan opens the door, and I come in, and Kenny Laguna is laying in bed. I don't know what the f**k is going on. There's towels shoved underneath all the door cracks, shower caps around all the smoke detectors. Joan is running around spraying orange-smelling cleaner to mask the smell of the pot."

"The (Oprah) show was where new artists got to perform with their idols, and I wanted to perform with Joan, of course. And we were in her bathroom, and we were smoking and just talking, and this was one of the moments in my life where I wanted to be as present and absorb everything that she said to me.

"I listened to her talk about her days with the Runaways. She talked about music. She talked about why she loves animals, and she doesn't want to eat them. I was getting to have this moment with someone that, to me, is Superwoman. What Superwoman really should be."