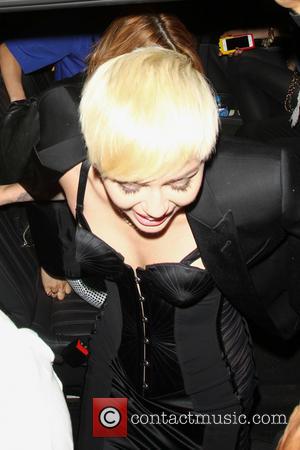 Miley Cyrus seemed to take a swipe at her ex-fiance Liam Hemsworth during a raucous gig in London on Friday (09May14) when she revealed she wrote her hit Wrecking Ball to seek out revenge on a former partner.

The pop superstar took to the stage for a top secret show at G-A-Y in the U.K. capital, and caused a stir as she cavorted with a giant inflatable penis in front of fans.

But she got serious later on in the concert when she spoke about how she penned Wrecking Ball after having her heart broken, sparking speculation she was talking about the Australian hunk, who she split from last year (13).

She said, "I wrote this song after somebody broke my heart, and I just wanted to say 'f**k you'. I wanted to write a number one hit, something that would be on the radio. I wanted to make sure every time he turned on his radio, he would hear my song and will keep hearing it for the rest of his life."

Cyrus also took the opportunity to air her views on sexuality during the G-A-Y concert, telling fans, "(I have a friend who is) straight but I said that for years too, and finally it gets easier. You know, everyone's a little bit gay. Some of us just a little bit more than others. You know, it's the truth. Everyone's gay."