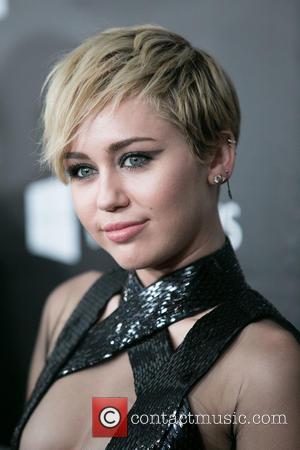 The Can't Be Tamed hitmaker began dating The Terminator star's son in October (14), and their romance sparked rumours his mother Maria Shriver was worried about any influence the pot-loving singer might have on her son.

However, Cyrus showed she is growing close to the family by heading to Sin City on New Year's Eve (31Dec14) with her boyfriend, his father, and his father's new woman Heather Milligan.

According to New York Post gossip column Page Six, they were joined by actress Sofía Vergara and her True Blood star fiance Joe Manganiello for dinner at a steakhouse, before heading to watch Spears' show at the Planet Hollywood resort.

Prior to the performance, Cyrus and her party had a private meeting with Spears, and after the show they reportedly whiled away the night playing blackjack in the resort's casino.

A source tells the publication, "Miley spent the whole holiday season with Patrick, Arnold and Heather Milligan. They spent Christmas and then New Year's together. Arnold approves of his son's new relationship, and he was the one who suggested they all spend New Year's Eve together in Las Vegas."