The 21 year-old singer posed with two other friends in several pics that showed off a tattoo of a badge with a drawing of the late Alaskan Klee Kai's face on it. 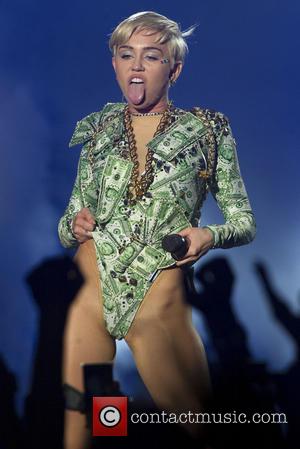 The memory of Miley Cyrus's deceased dog, Floyd, will no live with her forever.

Over the Fourth of July weekend the 21 year-old singer shared another topless photograph on Instagram, which also showed off her new tattoo.

The new ink looks like a badge with a drawing of the late Alaskan Klee Kai's face on it.

On Sunday (July 6th), Cyrus posted a pic of herself with two friends sporting the tattoo just under their arms.

Although it remains unclear if the tat is real, in several other snaps an artist is seen inking the group of friends.

This comes just a week after Cyrus introduced her new puppy, Emu, to her 10 million fans on Instagram by posting an adorable photo of herself cuddling up to the furry canine.

"Time to start making Emu accounts smilers. He's here and here to stay," she said. "I welcomed Emu Coyne Cyrus into the family a couple days ago. Been keepin him a secret cause sometimes I'm weird like that. It's taken some time to be ready for this next step and loving again."

Adding, "There will never be anyone like Floyd. There was a bond that was so deep it's irreplaceable but that's not what I am trying to do. Never will I replace Floyd and that's something I had to take time to understand."

Cyrus's mother, Trish, bought her a new puppy, named Moonie, in an attempt to help with the grieving process after Floyd died. But after owning the dog for just over a week, the songstress decided that it was "too soon" to move on.

However, Cyrus seems to be ready to welcome a new puppy into her life.

"We had a very special memorial service for Floyd and I felt my angel Floydy give Emu his blessing. I prayed to Floyd to just give him a touch of his awesomeness and he has. He is so special and different than my baby Floyd and I think Floyd did that on purpose," the caption continued.

"But sometimes he does little things that remind me of him and it makes me smile. I'm blissed the out right now," Cyrus concluded. "I feel like this is a new beginning in so many ways."