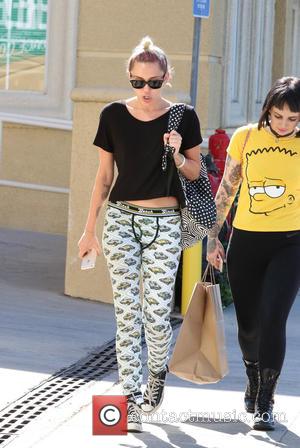 The Wrecking Ball hitmaker revealed images from her upcoming W magazine spread on Instagram on Monday (03Aug15), with one of the snaps further sparking speculation she is dating the 24-year-old Victoria's Secret angel.

In the risque black-and-white photo, Cyrus is topless with just a photoshopped red star covering her nipple, as Maxwell is seen holding the pop star close while feeding her a piece of cake with her hands.

Cyrus also wrote the caption, "This is how we party!!!"

In other shots from the magazine, Cyrus dons a black sequined bikini and body glitter as she lays on a carpet and caresses herself.

The photoshoot reportedly took place at a "secret party" in Los Angeles over the weekend (02Aug15), and also includes models Joan Smalls and Emily Ratajkowski, who bared all for Robin Thicke's Blurred Lined video.