Miley Cyrus Mike WiLL Made It

Miley Cyrus is putting the ''finishing touches'' to her new music with producer Mike WiLL Made It. 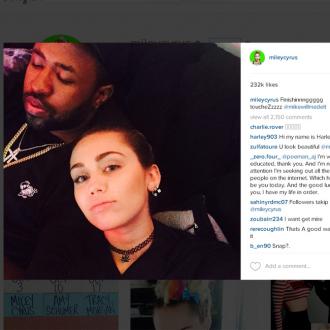 Miley Cyrus is putting the ''finishing touches'' to her new music.

The 22-year-old star has teased she has almost completed work on her eagerly-anticipated fifth studio album, almost two years after she released 'Bangerz', which spawned singles 'Wrecking Ball' and 'We Can't Stop'.

In a selfie posted on Instagram along with her producer and ex-boyfriend Mike WiLL Made It, she wrote: ''Finishinnnggggg toucheZzzzz @mikewillmadeit (sic).''

The controversial musician made the post just hours after the producer premiered the video for his new single 'Drinks on Us' - taken from his 'Random' mixtape - in which Miley is seen heading into a club and smoking a suspicious looking cigarette with him.

Meanwhile, Miley's recent cover story with the September issue of Marie Claire magazine suggested she is planning on giving away her new record for free, with the singer adding she only makes music because she enjoys it.

''And then I put it out to the public because there are some people out there who like it, too.''

And her manager Adam Leber added: ''Miley's not driven by dollars. She makes her own path. Once upon a time, that's what most artists did. Now, people like Miley are few and far between.''

Back in June, Mike Will Made It updated fans on the progress of the record, saying they had completed ''eight or ten songs''.

He said at the time: ''We've got like eight or ten songs recorded, so we're just gonna pick the best songs to go on the album.

''It should be interesting though. Her whole sound is switching up, you know what I'm saying? It's crazy.''