Miley Cyrus Has Recruited Pals Joan Jett And Ariana Grande To Rock Out In Her Backyard For A Series Of Videos Aimed At Raising Funds For Her New Charity, The Happy Hippy Foundation. 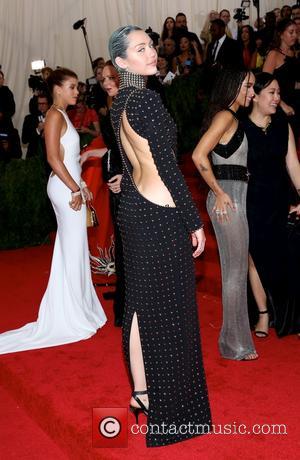 Picture: Miley Cyrus - A variety of stars turned out in style for the MET Gala 2015 and the opening of 'China: Through The Looking Glass'...

The Wrecking Ball hitmaker launched her crusade to help displaced youths during the MTV Video Music Awards last year (14), when she invited homeless pal Jesse Helt to accept her Video of the Year prize on behalf of all needy youngsters across the U.S.

She has since set up the Happy Hippy Foundation to provide help and support to those in need and the pop star recently held a series of jam sessions in her own Los Angeles backyard in an effort to raise money for the cause.

Videos of each get-together, which also featured Against Me!'s Laura Jane Grace and singer/songwriter Melanie Safka, will debut exclusively on Facebook.com, where fans will be encouraged to donate.

She tells U.S. breakfast show Good Morning America, "It was the best day, pretty much ever. Again, bringing it back to something that matters. I don't really wanna sing just for myself. I wanna be doing something."

Cyrus reveals she decided to champion the cause of helping displaced youngsters, many of whom are from the lesbian, gay, bisexual and transgender (LGBT) community, because she wants them to learn not to feel limited by their gender or sexuality.

She says, "I'm the one that can fix it and I think I've been able to identify with it just because I've never thought of myself as, 'I'm a girl so I can't do this', or, 'I can do this', or, 'I've gotta be a boy to do that'. I feel like I'm not tied to a gender or an age. I feel like an infinite, cosmic thing, and that's what I want people to feel."

The singer/actress hopes to one day expand the reach of her organisation to aid the homeless across the globe.

She states, "We started a year ago with Jesse and we were focused on homeless youth in L.A. and different support groups in San Francisco and the Bay Area, and now we're going bigger and kinda wanna take on America and by the end of it, we're gonna take on the world!"