The 21 year-old singer was back to her wild self as she recommenced the European leg of her tour infront of a sold-out crowd at London's O2 Arena. 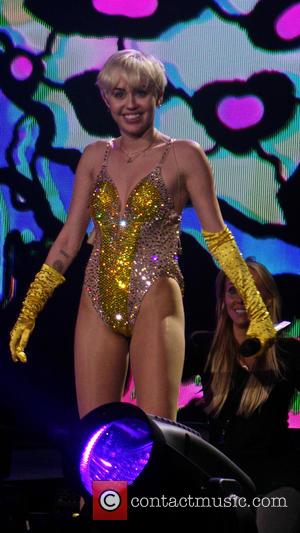 Picture: Miley Cyrus - Miley Cyrus opens her Bangerz tour with some dramas as she becomes trapped in costumes and even has her mum Tish on...

This was the first time the 21 year-old has performed since she was hospitalized due to suffering from "a severe allergic reaction," after taking antibiotics.

This led to multiple cancelations and postponements of her 'Bangerz' tour throughout the US and Europe.

But Cyrus seems to be back to her original self as she paraded around the stage in an array of provocative outfits, making sexual actions while singing her hit tracks and even spit water onto the lucky fans near the front.

At one point the 'Wrecking Ball' singer urged concertgoers to kiss people of the same sex!

"She got loads of same sex people to snog in the audience and put them on camera on a giant screen and make a speech about how we should all just 'be ourselves,' an attendee told MailOnline. "She said she 'hopes we are all drunk and on loads of pills', and at one point her dressers had to come on stage as her corset was undone while humping midgets."

Cyrus also revealed to the sold-out crowd that she suffered a separate injury while in hospital due to her obsessive compulsive disorder. ''She said she has OCD and sprained her ankle while cleaning during her recovery from her recent illness," the fan added.

Another concertgoer, who was clearly loving every minute of Miley's show, was fellow singer Lily Allen.

The native Londoner tweeted, "That was basically the best thing I've ever seen #BangerzTour #MileyCyrus." Cyrus retweeted the message.

Prior to performing at the O2 Arena, the 'We Can't Stop' singer squashed reports that her recent illness was the result of a drug overdose at a press conference in London.

"I didn't have a drug overdose. I took some s**tty antibiotic my doctor gave me and I had an allergic reaction," she told reporters. "I already had a death in my family so my immune system was already low."