The 21 year-old singer revealed 'Wrecking Ball' is about her ex fiancé, who she calls a "piece of sh–. That’s right." 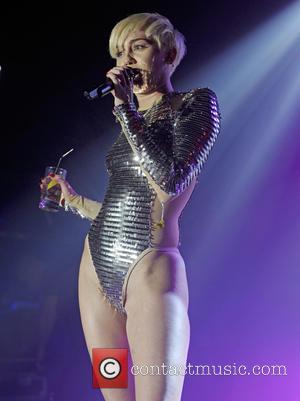 It seems Miley Cyrus isn't quite over her breakup from Liam Hemsworth.

The 21 year-old singer took the opportunity at one of her recent 'Bangerz' shows to get some things off her chest in regards to her ex fiancé.

Before performing her hit track 'Wrecking Ball' at London's G.A.Y club this past Friday (May 9th), Cyrus went on a lengthy rant, confirming the song is indeed about Hemsworth.

"And every time you get in your car, you're going to hear my f--king song on the f--king radio, you piece of s--t. That's right," the former Disney star told the sold-out venue.

"So then-you know, you can tell a lot about a person-I think you can tell how big their d--k is by how much confidence they have usually, and if I was a dude I'd probably have a really big d--k, 'cause I feel really good about myself now," she continued. "So I'm gonna tell those motherf--kers that broke my heart, particularly one, to suck my fat d--k and to enjoy hearing this song for the rest of your life. This song is called Wrecking Ball."

Surprisingly this is not the only outrageous moment of the show.

Cyrus shocked concertgoers when she introduced a new prop to her set. The young star brought a gigantic inflatable penis onstage, and posted a photograph on Instagram of herself licking it to simulate a sexual act.

MORE: Miley Cyrus And Other Stars Thankful On Mother's Day

But that is not all. The 'We Can't Stop' singer also made an inappropriate joke about date raping when she brought one of her close pal's on stage to wish him a happy birthday, but then began to discuss his sexuality.

"You know, everyone's a little bit gay. It's the truth," she said. "Everyone's gay, all it takes is one cocktail. And if that doesn't work, sprinkle something in their drink. That's what I always do."