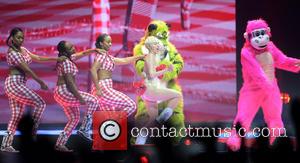 Miley Cyrus warned fans about the dangers of smoking cigarettes during a break in her comeback concert in London on Tuesday night (06May14), as she confessed she had to quit her nicotine habit because no one wanted to make out with her.

The singer was back onstage after an April (14) health crisis prompted her to scrap a series of shows on her Bangerz world tour, and she halted the fun to get serious when she smelled cigarette smoke at the O2 Arena.

Addressing fans, she said, "It smells like somebody's smoking in here and you're not smoking the good stuff."

Miley then encouraged fans with a nicotine habit to switch to weed, insisting, "You know weed has never killed anybody. Instead of smoking a cigarette, why don't you roll a fat joint."

The Wrecking Ball singer added, "I used to smoke, I smoked for three years and they were the best three years of my life... but they (cigarettes) slowly started to kill me and I started looking old and I'm only 21... and no one wanted to make out with me.

"In the middle of smoking all these joints... I could get any guy and girl to make out with me, because my breath smelled so hot.

"I love cigarettes but I can't smoke, so now I'm just trying to bring you guys all down with me, and make you not smoke either... I'm p**sed off because I can't have a cigarette. I wish cigarettes didn't kill people, because then I would f**king smoke all day."