Miley Cyrus has admitted she wants to preserve her sister Noah's 'innocence' for as long as she can. 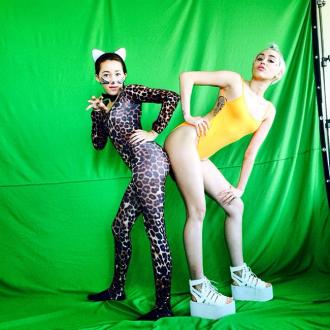 The 'We Can't Stop' singer - who has been criticised in the past for her controversial on-stage behaviour and provocative dance routines - feels protective of her 14-year-old sibling and wants to preserve her innocence for as long as she can.

She told 2Day FM: ''She's really into sports. She really loves horses, so I'm going to keep her on that and that kind of innocence as long as I can. It takes someone really strong and someone who doesn't care what people think [to survive this industry].''

However, the former 'Hannah Montana' actress admitted she would support her sister if she wanted to follow in her footsteps and become a star.

She said: '''She's a natural entertainer. Sometimes I'll be like, 'Oh my god, she's totally stealing my shine!' If she's in the room, all the attention is on Noah.

The 21-year-old singer - who was accompanied by her sister and mother Tish on her worldwide 'Bangerz' tour - also admitted it was ''easier'' to perform with the pair dancing along to her routines.

She explained: ''[Noah] does the dances with me the whole time. Sometimes she'll be doing them wrong and I'll notice I'm following her and doing the dance she's doing. So it's fun. We just play with each other the entire show because it makes it easier when you have your family there. My mom [Tish] does the whole thing too, she'll go to the front and do all the dances with me.''