Miley Cyrus exposed her breast and passed around a joint at the MTV Video Music Awards on Sunday. 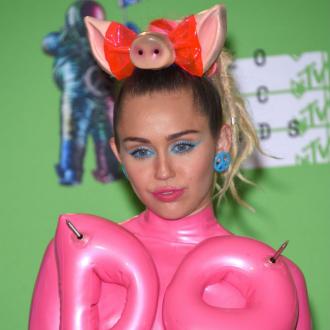 Miley Cyrus exposed her nipple and passed around a lit joint at the MTV Video Music Awards last night (30.08.15).

The 22-year-old singer promised the craziest VMAs in history and she certainly delivered with outrageous antics during the music ceremony, including an X-rated moment on live TV.

As the show drew near its closing moments, Miley was seen backstage hiding behind a black curtain in her dressing room. As she was handed a microphone by a producer, her left breast was exposed for the entire viewing audience.

As the camera quickly cut away from the wild child, she was heard saying: ''Oh what's happening? Oh sorry, my t*t's out?''

But Miley's shocking behaviour didn't end there as she also passed around a marijuana cigarette in the press room after the event.

According to the New York Daily News, she told members of the media: ''Everyone. I'm sure a lot of us have known each other for a really long time. Even though I'm not old, I've been doing this s**t for a while.

''And because you're all my friends, and my song is kinda sorta about the love of marijuana/the love of humankind, I brought a little joint if anyone would like any. Anyone?''

The singer also released her new album, 'Miley Cyrus and Her Dead Petz', online for free after hosting the VMAs.