An Array Of Stars Including Miley Cyrus, Lady GaGa And Ariana Grande Have Voiced Their Support For Retired Olympian Bruce Jenner After He Revealed He Is Undergoing A Sex Change. 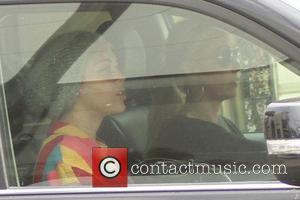 Picture: Miley Cyrus - American pop super star Miley Cyrus was snapped as she was out shopping at the Chanel store on Rodeo Drive in Beverly...

Kim Kardashian's stepfather went public with his much-speculated transition during a candid interview with U.S. newswoman Diane Sawyer on Friday (24Apr15), in which he admitted, "For all intents and purposes, I'm a woman."

In Bruce Jenner - The Interview, he revealed that he first began feeling confused about his gender from as young as eight years old, secretly dressing up in his mother's and sister's clothes when they weren't home and has started taking hormone therapy again, after previously taking the medication for five years back in the 1980s.

Numerous stars took to Twitter.com on Friday (24Apr15) to praise Jenner's honesty, Cyrus wrote, "I LOVE Bruce Jenner!... (I love) the part of Bruce special educating people on trans terms. This is a new world so we all have new things to learn. Never be embarrassed!"

Lady GaGa's message read, "We have the chance to write this moment in history together. Let's empower people like Bruce all over the world by being loving & not mean.... #BruceJennerABC Now that is bravery."

Grande posted, "Bruce Jenner is beautiful we all need to commit to making this world a more loving, supportive, SAFE/non judgemental place to be ourselves."

Lena Dunham uploaded a photograph of Jenner to Instagram.com with the caption, "Dear Bruce Jenner: Your words will have an incredible effect on so many... Not just people struggling with our culture's restrictive and binary concept of gender, but anyone experiencing shame around what they perceive as their 'otherness'. The bravery it takes to face an often unforgiving public and speak openly about your identity is stunning and to be celebrated. I hope we can all show you our best selves and meet your honesty with love and compassion. You are beautiful in whatever form you choose to inhabit. Congratulations. Love, Lena."