They've been on texting terms since meeting last year.

As odd friendships go, few are as unexpected as that of Drake and Millie Bobby Brown's. But since the latter has become a superstar, it seems her social circles have broadened considerably. Not everyone thinks it's healthy, but who wouldn't want to be besties with the 'Stranger Things' icon?

At just 14-years-old, it might sound strange that she is hobnobbing with celebrities more than twice her age, but 31-year-old Drake is turning out to be her go-to contact for boy-related advice. And having recently broken up with her boyfriend of 7 months Jacob Sartorius, she needs all the help she can get.

'We just texted each other and he was like, 'I miss you so much' and I was like 'I miss you too!'' She told Access Hollywood on the red carpet at the Emmy Awards this week. When asked what they generally text about, she said: 'About boys, he helps me'. However, she refused to go further into detail, insisting that 'stays in the text messages'.

They apparently met at the Brisbane Supernova convention where he visited on a break from his Australian tour back in November and they've been tight ever since.

People are naturally a bit creeped out at this friendship, but it's not that unusual. She has previously opened up about her close friendship with 'Breaking Bad' star Aaron Paul and his wife Lauren Parsekian, who she has dubbed her 'fake adopted parents'. Aaron even wrote a tribute for her when she was named on the Time 100 list.

In recent months she has also been seen hanging out with the likes of Taylor Swift, Paris Jackson and Maddie Zieglar among others. It's difficult to rise to fame at such a young age and not end up mingling with much older people, especially as showbiz is not a world nominated by children.

Millie Bobby Brown 'is working on an album' 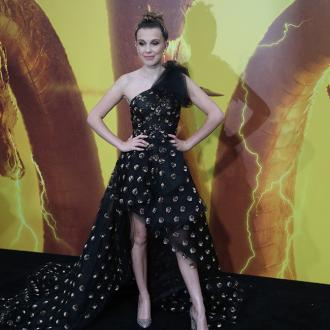