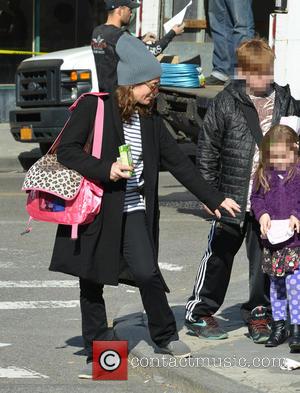 The costume designer and theatre director, who is the mother of Hoffman's three children, was left devastated in February, 2014 when the Capote star suffered a drug overdose and died, aged 46.

She took a leave of absence from her role as artistic director of New York's Labyrinth Theater Company, where the couple met in 1999, but returned to the role full time in the autumn (14) after watching Hoffman's close friend, Cate Blanchett, perform in Jean Genet's The Maids.

She tells the New York Times, "That was the first play that I saw after Phil had died, and she did that thing you want every actress in theatre to do: she left her heart on the stage. And I knew enough in that moment to go, 'I love theatre. I love it. I love what it can do'. And, not making a concrete decision, but knowing that I wasn't going to leave the theatre company, I wasn't going to stop doing this."

O'Donnell admits heading back to work wasn't always easy, but she refused to hide her frazzled emotions, both at home and at her job, whenever she started to feel overwhelmed.

She says, "I was pretty stubborn in my falling apart. And my kids saw all of it, because they should... Am I going to hide it from them? I don't want them to hide it from me. And, even as the artistic director, there were times when I was like, 'I can't do this right now, and I'm not going to pretend I can'."

O'Donnell is currently directing a new Labyrinth play, called Nice Girl, about a single woman who feels trapped living with her widowed mother, and she admits she felt a personal connection to the plotline: "It's a beautiful story of realising, at a certain point in your life, that you're stuck, and an event or a person comes into your life and kind of shakes that up. All of a sudden something happens, and then it's like: 'Am I going to take that next step? Am I going to do that next thing?'."

Reflecting on her tough year, O'Donnell adds, "I guess I would say that, after a year has passed, I'm able to function, if that's the right word, or be in the world a little bit differently."