Mindy Kaling has defended her controversial ELLE magazine cover following criticism of the publication for allegedly masking her figure and skin colour. 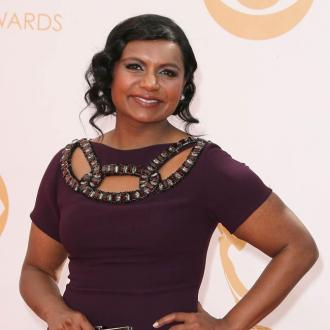 The US fashion publication released four covers for its annual Women in Television issue yesterday (07.01.14) but faced backlash after the comedienne's cover appeared to mask her skin colour and curvaceous figure in comparison to her fellow cover girls, Allison Williams of 'Girls' fame, 'Parks and Recreation' star Amy Poehler and 'New Girl' actress Zooey Deschanel.

ELLE was criticised for focusing on Mindy from the neck up on her cover, while the other stars were given full body shots showing off their petite frames. Additionally, the magazine came under fire for its black-and-white cover for 'The Mindy Project' star - who is of Indian descent and the only woman of colour among the four chosen cover girls - while Zooey, Amy and Allison all have full-colour covers.

Mindy took to Twitter to calm the controversy in her usual humorous tone, writing: ''Wishing for more skin on my @ELLEmagazine cover? Chris Messina & I are naked on a brand new #themindyproject tonight, ya pervs! 930/830 FOX

''I love my @ELLEmagazine cover. It made me feel glamorous & cool. And if anyone wants to see more of my body, go on thirteen dates with me. (sic)''

ELLE also responded to the backlash in a statement, which reads: ''Mindy looks sexy, beautiful and chic. We think it is a striking and sophisticated cover and are thrilled to celebrate her in our Women in TV Issue.''

The latest controversy follows criticism of the fashion magazine for its November 2013 cover featuring 'The Heat' star Melissa McCarthy.

ELLE's Women in Hollywood issue also had multiple covers, but while stars such as Shailene Woodley and Reese Witherspoon flaunted their figures, the magazine was accused of attempting to hide Melissa's body by styling her in an oversized coat.