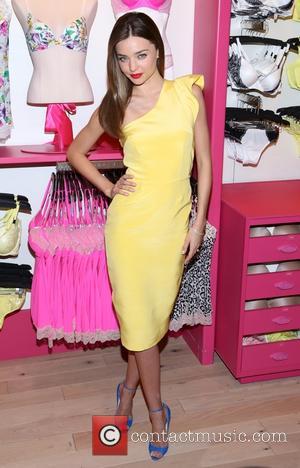 Victoria's Secret model Miranda Kerr has been left in a neck brace after a car crash in Los Angeles. The 29-year-old wife of Hollywood star Orlando Bloom was involved in the accident when a car ploughed into her own vehicle. Kerr was treated by paramedics and underwent an MRI scan in hospital before being placed in a neck brace, which she was later spotted wearing out in LA, partially covered with a scarf.

Miranda's injuries are not thought to be serious and she should have recovered fully within a few days. The driver of the other car involved in the accident was arrested at the scene, though it is unclear whether they have been charged. Kerr's spokeswoman Annie Kellier told Australia's 9 News website, "She is in a lot of pain but, really, we are just glad it was not more serious. Miranda was in a car with her assistant when the accident happened. Her son Flynn was not with her."

Kerr is one of the world's most photographed women and is the face of Victoria's Secret, Mango and her own cosmetics range Kora Organics. She married Bloom in 2010 and had her first child with him in 2011.

Kerr began her modeling career when just 13, starting out life at Chaay's Modelling Agency before winning a 1997 Australian nationwide seatch for the next big thing, organized by Dolly magazine and Impulse fragrances. The rest, as they say, is history. Miranda Kerr Is Said To Be Recovering After Her Car Crash