Miranda Kerr has introduced Evan Spiegel to her parents, with the Snapchat founder getting their seal of approval during a trip to Greece. 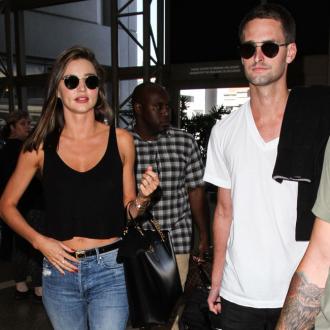 Miranda Kerr has introduced Evan Spiegel to her parents.

The Australian model, who has four-year-old son Flynn with ex-husband Orlando Bloom, is reportedly thrilled her mother, Therese, and father John gave the Snapchat founder their seal of approval during a trip to Greece in July.

A source close to the 32-year-old beauty said: ''She thinks he's sweet. It's gotten serious fast.''

The billionaire, 25, has also developed a close bond with Flynn.

The insider added to Us Weekly magazine: ''Miranda is super into him. It's hot and heavy.''

The couple, who started dating in June, were spotted boarding a flight at Los Angeles International Airport earlier this week and are planning to enjoy their first romantic holiday together to Paris.

While Miranda regularly travels the world for work, she recently admitted she prefers spending time in LA with Flynn.

She said: ''I loved living in New York - I was there for ten years - but LA suits family; it's better for my son to have a garden.

'I've got a house now, which is nice, and I have speakers out by the pool. I love to go swimming with Flynn with music playing.

''Flynn and I love picking vegetables from the garden together.

''Well, I do have some help with the gardening...because I'm not always there.

''For me, just being home is the greatest luxury of all.''

Miranda Kerr uses tennis ball to massage herself in quarantine