Miranda Kerr and Orlando Bloom's four-year-old son Flynn has made his modelling debut alongside his mother in the latest issue of VOGUE Australia. 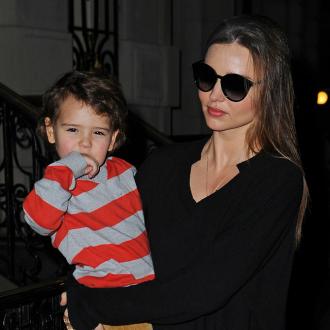 Miranda Kerr's son has made his modelling debut.

Flynn - who is the son of the former Victoria's Secret model and 'Pirates of the Caribbean' actor Orlando Bloom - appears alongside his mother in her shoot for the latest issue of Australian VOGUE magazine.

The images were taken in Sydney, Australia last month and Miranda pitched the idea to the magazine after checking that her former partner approved.

VOGUE Australia's editor in chief Edwina McCann told the Australian Daily Telegraph newspaper: ''She had to approve the image and had to check with Orlando in advance.''

Speaking about Flynn's performance in front of the camera, she added: ''He loved it. Loved being involved and working with mummy, and the crew fell in love with him.

''He's such a confident little kid and they have a playful relationship.''

The four-year-old budding fashionista was photographed in a pair of perfectly pressed pyjamas alongside his mother, styled by the publication's fashion director Christine Centenera.

Miranda split from Orlando last year after three years of marriage and has since posed for a series of racy shoots, including a completely nude GQ magazine cover photographed by Mario Testino.