Miranda Lambert's private plane was force to land in West Virginia yesterday after it lost cabin pressure mid-flight to Tennessee from New York. 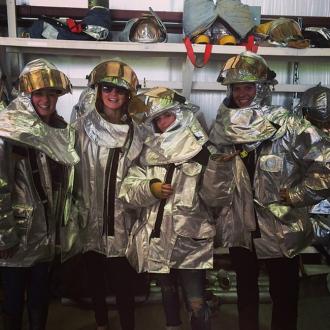 The country star feared for her life on Tuesday when the jet carrying her and and her team from New York to Nashville lost cabin pressure and was diverted to Clarksburg.

The plane spent three hours on the ground before continuing with the journey to Nashville and arriving at Smyrna Airport in Tennessee around 7 PM, according to Miranda's publicist, Wes Vause.

Despite the scary encounter, the blonde beauty, who married Blake Shelton in 2011, appeared to have the time of her life yesterday as she and her team hung out with firefighters in West Virginia to help pass the time.

She accompanied the photograph with the caption: ''Our plane had an emergency landing in Clarksburg WV. But don't worry, we found platinum fire suits. Yes! #platinum (sic)''.

The singer had been in the Big Apple promoting her new album 'Platinum' and was returning to Tennessee to perform at the CMT Music Awards with Carrie Underwood tonight (04.06.14), before travelling to Dallas, Texas, on Saturday (07.06.14) to duet with GEORGE STRAIT.