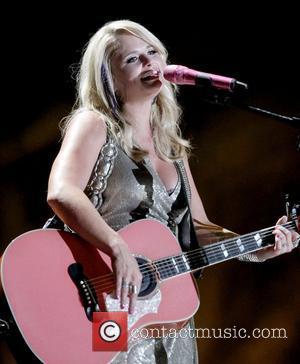 Newlywed country stars Miranda Lambert and Blake Shelton are set to record a duet.
The music-making duo wed in May (11) and now the Award-winning hitmakers have plans to take their relationship into the studio to lay down their first track together.
Lambert shut down New York City's famed Central Park for a gig as part of Good Morning America's summer concert series on Friday (08Jul11) and when asked by reporters whether she and her husband would ever team up on record, she gushed, "We want to actually. Hopefully, on my next record, we're going to."
Lambert had another major announcement to share - she's releasing two new albums in the coming months. There will be a solo album, Four The Record, on 1 November (11) and another with brand new girl group Pistol Annies, which will hit U.S. stores in August (11).
Coincidentally, while Lambert was busy entertaining her followers on the U.S. breakfast show, Shelton drew a crowd of his own just a few blocks away in Rockefeller Center for his gig on rival programme the Today show.
The two playfully duked it out for viewers via Twitter.com. On Thursday (07Jul11), Lambert wrote, "Ok.. Blake is on Today show tomorrow Watch one , record the other:) 'his fist is Big but my Pistol Annies are bigger...' hehehe."