Review of Lights and Offerings Album by Mirrors

When you press play on the debut album by Mirrors and the first track Fear Of Drowning begins, you could be mistaken for thinking it was an electro/synth version of Baba O'Reilly. Wouldn't that be weird. However, it isn't. In fact Mirrors couldn't sound less like the Who if they tried. Thank God, that would be rather turgid. They do however sound like loads of synth pop groups before them, with tracks as synthetic as Lady GaGa's wardrobe. Also, the first track is bloody long, over 6 minutes! 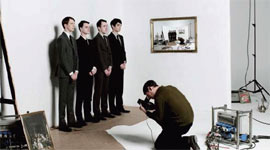 It feels like the album just floats along, aimlessly offering nothing until Into The Heart arrives to kick start proceedings properly. This is a real stinger, something obvious influences Tears for fears would be proud of. A dance floor filler that also has an emotional side, its Mirrors showing exactly what they're about. It's a curious track that manages to sound like Bono guesting on a Hot Chip single (imagine that!), surely worth a re-release as the bands profile inevitably grows.

Other single Hide and Seek is similarly slick in its arrival, sounding head and shoulders above anything else on the album, this time it's more Killers Human than it is Tears For Fears. It's a euphoric uplifting track that doesn't even consider treading water, every note and verse fits perfectly together. It's second only to Into the Heart.

A subtle variation is used in the form of Something On Your Mind, a slower track that has a touch of The Cure about it, not just in the Robert Smith style delivery of the vocals, but also the distinct bleakness of the music. This is a theme soon dropped in order to make way for a track that's as 80s as listening to the Wall Street soundtrack on a walkman. Searching in the wilderness even has spoken word parts to really ram home the 80s message. Enjoyable if not overly tacky.

It's almost as if, past track three, Mirrors bluntly refuse to look back. The stagnant bores that are the first two songs are instantly forgotten and what we're treated to instead, is a run of single material tracks that blend euphoric synths, hard electro beats and well crafted melodies to moving effect.